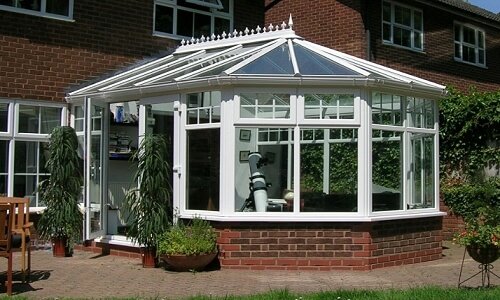 This type of home extension is one of the “period conservatory designs”, that also includes a few other styles such as Edwardian or Georgian conservatory designs. The period room categorisation arose from the time when this style of conservatory first appeared. In this case it was the reign of Queen Victoria from 1837 to 1876.

Victorian conservatories are very different from other styles, as they are the only design to incorporate facetted sides as the main feature. This gives the overall impression of being a more circular room than square or rectangular.

They also feature high, quite steeply sloped, facetted roofing and are usually quite ornamental and elaborate in appearance. It is common to see very fancy detailing on the roof ridges.

The Victorian is not the cheapest priced type of conservatory in the market, but you can find prices for a 3500mm x 4000mm uPVC Victorian conservatory from around £10,000 to £12,000.

In this guide you will find sections covering:

The 2 most often seen basic designs for the Victorian style of room are:

Each course of standard brickwork is 75mm, giving an internal wall height of 600mm + window cills. Some homeowners use blockwork and painted render finishes or stonework, which also work well.

Both of these styles can be seen with 5-facet or 3-facet construction, although 5-facet Victorian conservatories are more rarely seen than 3. This makes the actual number of sides either 5 or 7 respectively. 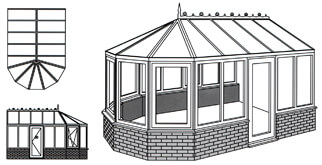 The addition of Dwarf walls, if you are using a double skin cavity wall, will require you to use trench foundations for the conservatory base. The extra labour and material will definitely make this type of conservatory more expensive than a full glass version – for example:

One alternative, if you have a restricted budget, and want a small conservatory, is to look into possibly using a steel base “modular” type. These can be supplied for DIY conservatories, or you could get a qualified local tradesman to build it for you. Prices for the “kit” can start from under £3,000.

The one drawback of using a “kit conservatory” and building it yourself is that you are totally reliant on your own skillset and can lose valuable guarantees offered by professional installers who are members of a recognised trade body such as FENSA or DGCOS.

Don’t forget, its not just the room itself that needs putting together properly, you can also be dealing with electrical wiring if you want power sockets and lighting in the room.

The roof of a Victorian conservatory, especially a 5-facet version, is quite a complex, high vaulted design giving plenty of headroom.

Many homeowners buying their first conservatory go with the standard roof, which uses polycarbonate panels. Twin or triple wall polycarbonate panels are quite cheap & less breakable than glass. The “not so good” news is that they have a reputation for being very noisy in the rain and for allowing too much heat or cold into the conservatory.

Better alternatives are double glazed or tiled roofing. Even though they are costlier to install, you are going to be able to enjoy your conservatory properly in all types of weather.

A double glazed glass conservatory roof fitted with low-e sealed units should be very effective at managing the temperature inside your conservatory.

Tiled conservatory roofing is more effective for both energy and sound insulation, but the “trade-off” is higher cost and reduced internal natural light.

It’s going to be worth your while taking the time to study the Pros & Cons of each roof type before you install your conservatory, it could save you the time and trouble of replacing it later if it turns out to be unsuitable for you.

Some things to bear in mind are building regulations for solid conservatory roofs, and you may need to strengthen the existing frames to take the weight of a tiled roof.

For lager Victorian conservatories, there are a few variations on the design available, such as P-shaped, T-shaped and B-shaped.

One other conservatory style which is quite reminiscent of the Victorian Style is the Gull-wing Lean to conservatory. It has the same facetted sides, but it look like a super-wide version.

The opening out action of a pair of French doors has the advantage of not taking up any internal space, which is very useful if your conservatory is a bit tight for space inside.

As much as it may appear, French doors are not compulsory, although they do suit the style very well. A good alternative is to use Bifold doors as they also have the advantage of getting out of the way when opened. They can also work in a bigger opening than French doors can.

UPVC has a very strong presence in the conservatory market and Timber Victorian conservatories will always have a big fan base.

Aluminium, although used for many years in double glazing, is a bit of a relatively “new kid on the block” in terms of popularity. However, modern conservatories made from aluminium offer super levels of energy efficiency, long lifespans and are just as easy to maintain as UPVC versions.

Price-wise, aluminium conservatory costs are higher than UPVC, but not quite as high as hardwood rooms such as Oak.

The images above all show UPVC conservatories. One in white, one in Oak and the other in Mahogany. Coloured uPVC is readily available in the market with around 20 colours. If you are not a fan of white uPVC, then how about something like:

Aluminium has an even bigger range of colours, having between 100 to 200 shades. Of course, the extent of the range available will be down to the supplier, not all of which will have all the colours.

Using a colour is usually classed as an added extra and attracts a charge. This could be around 10% to 15% in some cases.

In both UPVC and Aluminium, the colours are bonded onto the frames during the manufacturing process. This gives the finish great resistance to peeling, flaking or cracking. They are also very resistant to fading from direct sunlight or harsh weather and should easily last the lifetime of your conservatory.

A brief word about planning permission.

You may have read or heard that conservatories are permitted developments and don’t need planning permission. In certain cases, this is true. However, as a form of home extension will need to fit into the rules.

It’s always prudent to get a professional opinion, your installer should know a lot about the subject. But it’s better to also double check with your local authority as there may be some restriction at play, that neither you nor they know about.

If you have previously extended, live in a listed building or an Area of Outstanding Natural Beauty (AONB), then it’s essential to check as it’s virtually sure to be needed in the latter 2 circumstances.

Which material you use, how big your conservatory is, and what extra’s you include are all going to make the conservatory cost higher or lower. As a general guide, price-wise, uPVC usually comes out best with Aluminium and Hardwood being more expensive.

Our suggestion, alongside that of many consumer associations, is that you collect at least 3 or 4 written quotes to compare what is on offer before coming to a buying decision 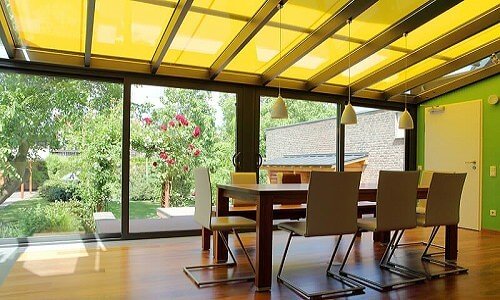 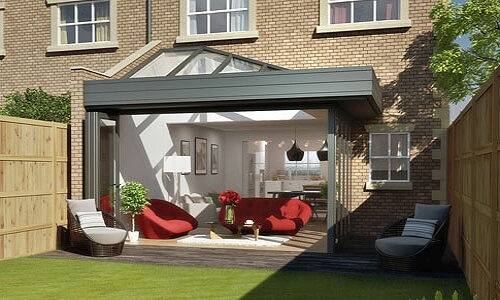 Have Your New Conservatory Designed & Fitted by Experts 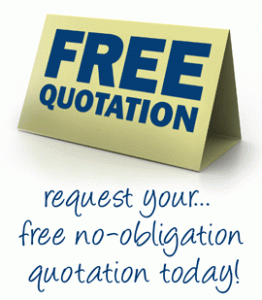